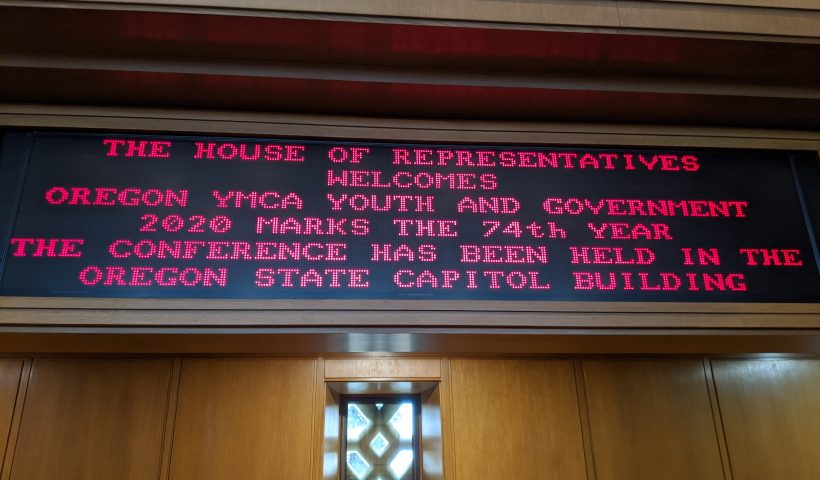 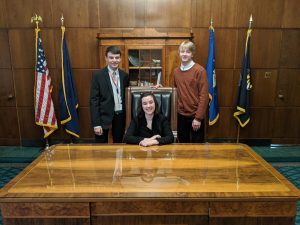 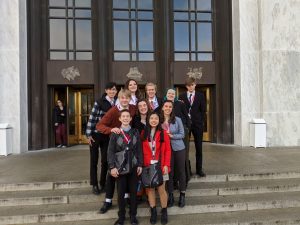 The program is an annual 3-day intensive educational experience unlike any other. It allows students to practice parliamentary procedure and actively participate in a mock legislative process. Working with volunteer advisors at their schools, delegates learn how to write bills, work in committee, and debate on the chamber floor. They serve as legislative officers and elect a youth governor. Twenty students, most of them freshmen, joined the event as pages.

A total of 29 measures were reviewed in committee and debated on the House and Senate floors before being signed or vetoed by the 2020 Youth Governor, Madeleine Getz, a senior from West Albany High School. Delegates Diego Silva and Bailey Filley of West Albany High School were recognized for their excellence in measure writing with the William T. “Doc” McLean Master Measure Award for HM212 Period Products for all Middle and High Schools. A team of West Albany students were recognized by the student-elected officers for their measure that preserves and/or enhances Natural Resources and demonstrates Oregonians’ creative problem-solving abilities. Caroline Gao, Spencer Madsen, Malachi Murphy and McKenzie Morris received the Don Andrews Oregon Heritage Award.

Dezmond Remington, of West Albany High School, and Lindsay Boisvert, of Sherwood High School, were selected by their fellow delegates as the outstanding student legislators. They received the Wallace P. Carson Outstanding Senator and Representative Award, recognizing excellence and outstanding behavior, modeling YMCA values both on and off the chamber floor, demonstrating leadership qualities, speaks to issues with clarity and passion, and encourages and guides others to participate in the legislative process.

Sherwood High School was honored as the Outstanding Delegation, meeting all deadlines, following established rules, having all measures follow proper form and style, and attending all conference functions.

Youth and Government™ is a national program of the Y that involves thousands of teens nationwide in state-organized, model-government programs. Students from every corner of the U.S. have the opportunity to immerse themselves in experiential civic engagement and to, quite literally, practice democracy. The Oregon program is in its 74th year.